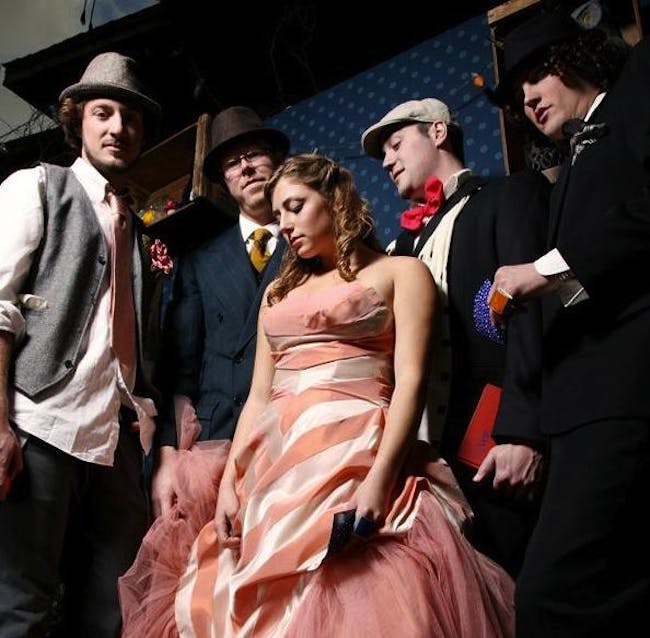 iCal
Google
Hometown heroes WOOSTER return to Moe's for a Saturday night Halloween Weekend! This show sells out in advance, so grab your ticket!

Years of living on the road, crashing on strangers’ floors and playing for sweating, screaming crowds have infused Wooster’s sound with a precious ingredient known as life force. Give this Santa Cruz, CA-based soul/reggae/rock quintet’s new album If All the Dew Were Diamonds a spin, and you’ll hear the kind of music that can only be made by people who are neck-deep in life, with all its beauty, heartbreak, mess, marvel and mystery.

Described by various music critics as “smoldering,” “top-notch,” “one-of-a-kind,” “addictive” and “like a breath of fresh air,” the Wooster sound is a party-ready mix of California reggae and Aretha Franklin-esque soul, spiced up with hints of Motown, surf, Latin rock, funk and hip-hop. Listen closely, and you might detect a little Chili Peppers swagger, a little Dave Matthews bounce or a little Led Zep muscle. The end result? Think Sublime after anger management, or No Doubt on soul serum.

With Diamonds, the members of Wooster—vocalist Caroline Kuspa, guitarist/vocalist/songwriter Brian Gallagher, lead guitarist Zack Donahue, bassist/guitarist Bobby Hanson and drummer Nate Fredrick—graduate from being “one of Santa Cruz’s liveliest local acts” (Santa Cruz Weekly) to being one of the hottest, sassiest, most dynamic acts around, period. All the elements that made their 2009 debut album The Heights of Things sparkle are back in bigger and badder form: tight musicianship, lead vocals that soar and simmer, ultra-catchy melodies, harmonies smoother than Malibu rum, choruses that kill, uptempo numbers that burn, softer tunes that soothe, and above all else, grooves that could disable even the strongest anti-dancing muscles.

As Gallagher explains, the title If All the Dew Were Diamonds is a reference to a conversation between two hung-over paisanos (countrymen) in the Steinbeck novel “Tortilla Flat.” “The paisanos may be penniless and adrift, but they get to lounge around in the morning sun watching the dew sparkle in the grass,” he says. It’s a lifestyle that Wooster can relate to. “We’re not coming home from tour with hundred dollar bills falling out our pockets, but what we are coming home with is real-deal, salt-of-the-earth experiences,” Gallagher notes. “I’ll bet you there’s a CEO somewhere wishing he could trade his bald spot for some drink tickets and a chance to stand onstage and pour his heart out.”

The line “I’m gonna live until the day I die” from Diamonds’ last track, “Day I Die,” says it all: these five music-worshipping road warriors intend to keep living full-tilt, full-color, full-on, all the way to the final cut. In the process, they’ll keep cranking out some of the most irresistible grooves on the planet, and they’ll continue to remind us where the real wealth is: right before our eyes.