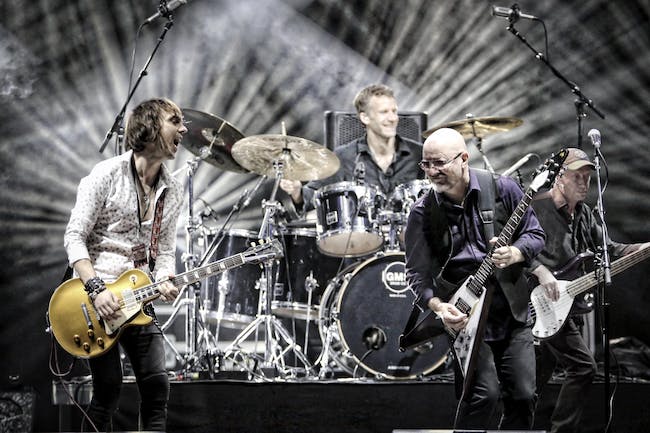 Wishbone Ash celebrates a half-century of live twin-lead guitar power in 2020. Fans can look forward to enjoying repertoire from the band's vast catalog of exactly 100 unique releases – 27 studio albums, 24 live albums, 43 compilations and box sets and five live DVDs, along with a DVD rockumentary (“This is Wishbone Ash”). Continually pushing their creative process, the band will release their next studio album, “Coat of Arms,” on Feb. 28, 2020. The first single, “We Stand As One,” was officially released on Jan. 10.

The U.S. leg of the 50th anniversary tour sees the band traversing the country's Southern swath from Florida to California and up the Pacific Coastline. The band will return for a Fall Tour in the Northeast and Midwest.

Formed in October 1969 in London, England, Wishbone Ash is one of the most influential guitar bands in the history of rock. Inspired equally by British folk traditions, American jazz and R&B, the group vaulted to public and critical acclaim, touring arenas, stadiums and theaters throughout Europe and the United States. Power and melody have made the Ash a hard act to follow, while they are currently being discovered by new generations of loyal rock fans.

Through the years the band has delved into various musical genres, from folk, blues and jazz to pedal-to-the-metal rock and electronica. Whatever the style, Wishbone Ash’s signature is the distinctive twin-melodic lead guitar interplay that has influenced such bands as Thin Lizzy, Lynyrd Skynyrd, Iron Maiden and, more recently, Opeth.

“The blueprint and musical roots that we laid down in the early 1970s must have been really strong to have lasted this long,” says founding member Andy Powell (guitar, vocals). “Every band needs a plan and most importantly, to find THEIR own sound.”

The 50th-anniversary tour officially kicked off in October 2019 with 31 shows in the UK, followed by January and early-February dates in Europe that included a package tour with Nazareth and Uriah Heep. Following the US tour, the band embarks on their second On the Blue Cruise adventure, with more exciting shows to be announced later in the year.

“The band basically lives together year-round on the road, so we have a very strong level of communication that translates in our performances and recordings,” says Powell.

A key ingredient in the band's recipe for success is a devoted fan base, many who have followed Wishbone Ash from the beginning, and which often includes their children and even grandchildren.

“We value our fan community above all else,” Powell says.

“I’ve seen a lot of changes in the music business and the world in general, as you can imagine,” Powell says. On looking back over the 50 years of the band, he muses, “Like all success stories, a career like this has its downs as well as its ups, and and the true ups can only be measured in this way.”

There is no other rock band in history that has done more with the twin guitar concept than Wishbone Ash.