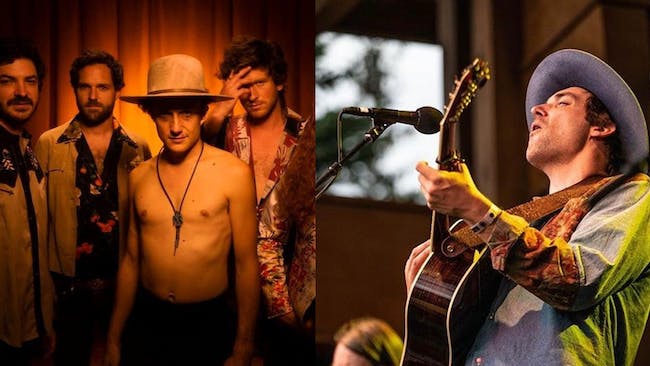 Whiskerman is a rock-and-roll overture to the great unraveling. Over the last 7 years the Oakland band has developed an underground reputation for tackling the sublime with their ambitious songwriting, thunderous stage show, and acute lyricism. They have since emerged as an engine of the Bay Area’s revitalized psychedelic and festival scenes. Frontman Graham Patzner, who will crow like a medicine show preacher, and then coo you into the arms of his lovesick eternity, might be a spitfire protege of the underworld himself, though, through and through he will remind you that there is no rapture without artistry. On the surface this is splendid rock-and-roll, rooted in the classic, psych and glam rock tradition, but the pageantry and chaos of Whiskerman’s performances will leave you describing an experience more than a sound.

Colorado singer-songwriter, Daniel Rodriguez, turns to his acoustic guitar for memorable, melodic hooks to accompany his poetic and contemplative folk songs. Boulder Weekly refers to Rodriguez’s voice as “a timeless voice, deep and hearty, weathered but comforting.” Daniel and his four-piece band are touring this Fall across the west coast of the United States. With over a decade under his belt as one of the founding members and lead songwriters of the transcendental folk band, Elephant Revival, Rodriguez is well-versed in the Americana tour circuit. Before going on hiatus, after their third headlining Red Rocks show in May 2018, Elephant Revival had released six albums and performed countless shows and festivals across the nation as well as overseas. Needing to fill the musical void that might have become following Elephant Revival’s hiatus announcement, Rodriguez immediately headed out on tour as a solo artist. He’s been chosen as main support for bands and shared stages with such acts as Jim James, Gregory Alan Isakov, The California Honeydrops, Mandolin Orange, Josh Ritter, Fruition and John Craigie in addition to being added to numerous festivals like Northwest String Summit, Lyons Folk Fest, Jam Cruise and WinterWonderGrass. Daniel Rodriguez released his debut collection of songs as an EP titled Your Heart The Stars The Milky Way on February 15, 2019.