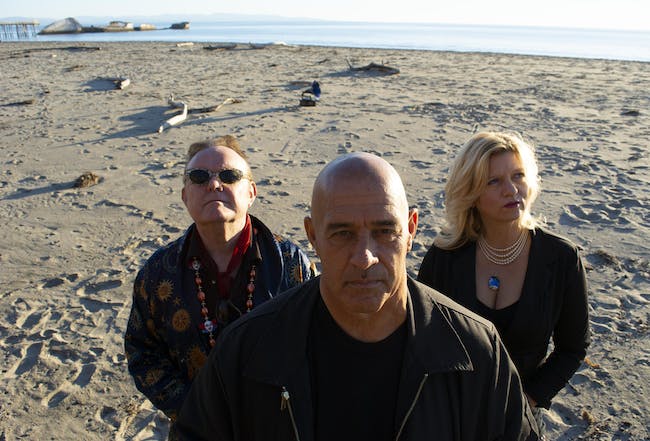 The Mermen are an American rock band from San Francisco, California that formed in 1989. The group’s sound was originally rooted in instrumental surf and psychedelic music of the 1960s. Although their music delves into many genres, the sound is non-commercial and is mainly influenced by the band’s founder, songwriter and guitarist Jim Thomas’ modern melodic visions. The band’s music is entirely instrumental and “does a good job of defying description”, not fitting neatly into any musical genre. In concert, the Mermen always perform as a trio: electric guitar, electric bass, and drums (Jim Thomas on guitar, Jennifer Burnes on bass, Martyn Jones on drums). Their music is rooted in the kind of instrumental “surf” music sound made by the Ventures, Dick Dale, Link Wray, and Jack Nitzsche (e.g. The Lonely Surfer). Their sound is often described as distinctly of the American West (especially the West Coast). This is an American sound; think Aaron Copland and bluegrass, (Jim played in the bluegrass flatpicking championships in Winfield, Kansas in 1977). It is a unique sound influenced by Native American, cowboy and transpacific sounds. One writer dubbed the Mermen’s sonic signature as “the sound of California”. During live shows, Mermen songs often morph into lengthy improvised variations on a theme -a la the Grateful Dead- with new pieces of music created on the spot.