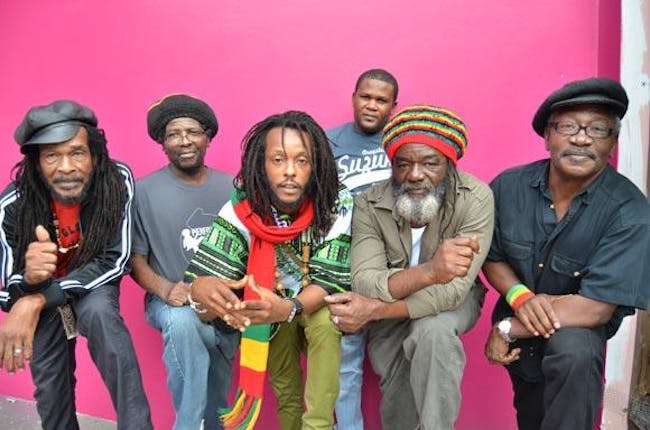 Founded in 1965 by Albert Griffiths, David Webber, and Errol Grandison The Gladiators has released some of the most mythical songs of Jamaican reggae. Their first hit, the single Hello Carol, was released in 1968. In 1976, thanks to their signature at Virgin, the trilogy Trenchtown Mix Up, Proverbial Reggae and Naturality has been distributed all around the world and some of the songs of these albums have become classics of the reggae as Mix Up and Roots Natty Roots.

The band has always been very productive and in 2014, The Gladiators had already released more than 40 albums. The lyrics are often militant and the very recognizable vocal harmonies are unquestionably a major part of the success

At first, The Gladiators were a vocal trio. With the departure of the two other singers, Albert Griffiths took the leadership. Clinton Fearon spent a few years by his side but in 1987, he left the band to start a solo career. Beside Albert Griffiths (guitar and lead vocal), the lineup includes Gallimore Sutherland (Rhythm guitar and backing vocals), Clinton Ruffus ( Leadguitar), Vernon Sutherland (keyboards). Ruddlowe Robinson(Backingvocals)

In 2004, Albert Griffiths decided to stop touring, and at first, he passed on the torch to his sons Al on vocals and Anthony on drums. Together, they recorded the album Father and Sons in the Anchor studio in Kingston. After a few tours in this lineup, the historic members of The Gladiators (Gallimore Sutherland, Clinton Ruffus, Ruddlowe Robinson, Vernon Sutherland) and Anthony Griffiths, who remains the drummer of the band, chose Droop Lion who is the Nephew of David Webber to be the new singer of the band, whose grain of voice is quite close to one of the original singer.

The young artist, who already got noticed in 2011 with his hit “Freeway”, and as the support act for Capleton’s European tour in 2013, has since become the new rising star in Jamaica, and at Spring 2015, Droop Lion appears as a featuring on Israel Vibration's first single "Man Up" out of their new album "Play it Real"

Early 2014, Droop Lion and The Gladiators released a new album entitled “Back On Tracks” recorded at The Mixing Lab studio in Kingston & Cave Studio, Produced by Clive Hunt, Cabel Stephenson & Clinton Rufus. This album is the first which was released by The Gladiators for 10 years

Droop Lion and The Gladiators have since toured several times in Europe (including a crowded club tour early 2014 and the festivals season at Summer 2014 including appearances at Couleur Café, Rototom, Chiemsee etc, Solidays in France to name a few ) performing the traditional repertory of The Gladiators as well as their new songs, as "Ghetto Life & Burning and Looting" for instance, which renew and energize the show !