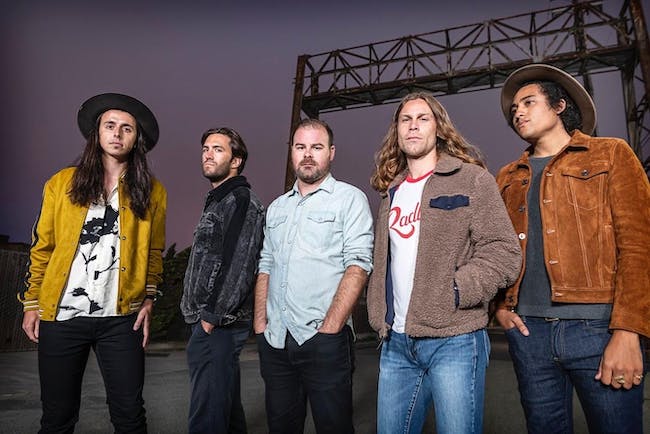 Jamie and Kellen Coffis, born and raised in the Santa Cruz Mountains of Northern California, don’t tend to overthink their music. Nothing in their repertoire is overwrought or outstays its welcome. This is pure roots rock, focused on melody, harmony, rhythm and mood. There are echoes of The Byrds, Tom Petty and The Jayhawks, and from years of touring, they have honed their sound into shimmering, high-energy rock and roll. They’re positioned in a long line of sibling duos that stretches back to the Delmores, the Louvins, and the Everly Brothers.

On their fourth full-length studio album The Coffis Brothers sought out the help of Tim Bluhm of The Mother Hips to produce In The Cuts. Recorded at 25th Street Studios in Oakland at the beginning of 2019, and finished over several months at Bluhm’s home studio in Fairfax. In The Cuts is a 12 song rock and roll album that marks the latest installment in The Coffis Brothers’ catalogue. All songs were written and sung by Jamie (vocals and keys) and Kellen (vocals, guitar), and were performed by Kyle Poppen (lead guitar), Aidan Collins (bass, backing vocals), Sam Kellerman (drums and percussion), and Tim Bluhm (backing vocals, and guitar.)

The brothers, Jamie and Kellen formed the band in 2010 along with childhood friend and neighbor Kyle Poppen. In 2011 the band recorded and released their debut full-length self-titled album which was followed up with their Single, Waiting For You in 2012 and their second full-length album in 2014 titled Wrong Side of The Road, all of which were produced by Andy Zenzcak at Gadgetbox Studios in Santa Cruz. Following the release of Wrong Side of The Road, Aidan Collins joined the band on bass guitar ahead of recording their third album, Roll With It (produced by Andy Zenzcak at Barefoot Studios, 2017.) The following two years consisted of constant touring of the West Coast with Sam Kellerman on drums prior to recording of In The Cuts.

“The Coffis Brothers have developed a sound that has an easy rock vibe that’s actually hip.” – San Francisco Chronicle

“The Coffis Brothers mix a blend of folk, country and rock with the intensity of personal lyrics into a gritty and often tender harmony of sound… a show that delivers one part Avett Brothers and one part early Neil Young for a full night of dancing and fun.” – Santa Cruz Weekly