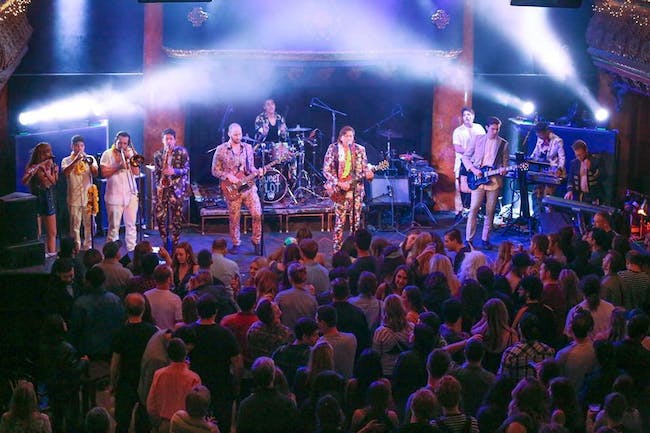 ABOUT SWEET PLOT - The fun and the funk never stop when it comes to Sweet Plot. Born out of a late night bay area jam session in 2014, Sweet Plot's musical directions has continued to grow but its members ethos remains the same; to bring an unforgettable musical party where ever they roam. With its music steeped in the funk, soul and rock sounds of the sixties and seventies, the band brings a modern twist to a tried and true formula. It isn't a question of if but of how hard you will hit the dance floor when Sweet Plot hits the stage. Hailing from San Francisco, Sweet Plot has not slowed down since hitting the ground running, releasing three full length albums and currently working on a fourth. 2018 was a big year for the group, playing sold out west coast shows as well as making an appearance as the opening act at Outside Lands Music Festival. 2019 started with a bang for the group, releasing their third LP, "Wall of Eyes." Be on the lookout for Sweet Plot to make an appearance in your town as the band looks to further its travels and hit the road.

ABOUT YAK ATTACK - Yak Attack is a live electronica power trio from Portland, Oregon. Founded in 2013, the band has experienced steady growth over the past few years and has been building buzz on the strength of its live shows and the instant connection its music makes with new listeners. The group's music is best described as "organic electronica", using skillful playing, live loops, and tightly constructed songs combined with raw improvisation to build high-energy and uplifting music from scratch, where every note is played and recorded live. The band draws on influences from a wide spectrum of electronica, such as house, drum and bass, and breakbeat, along with elements of jam, funk, and jazz. The result is a live show that is musically sophisticated but widely accessible, with a diverse and engaged fanbase that travels to out of town shows and festivals to witness the band's continually evolving sound.