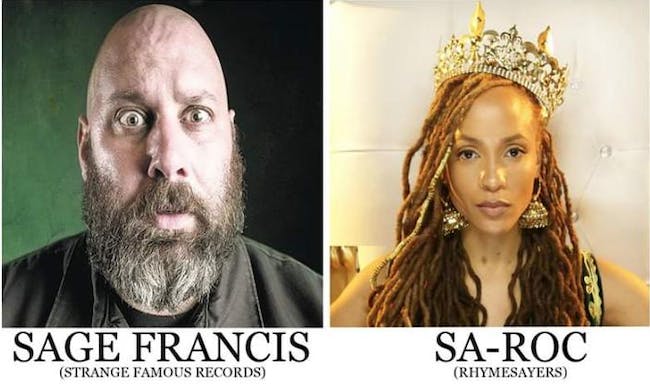 We bring to you LIVE IN SANTA CRUZ

Sa-Roc is otherworldly-figuratively and literally. Since appearing on to the hip-hop scene in 2008, she has upended conventional narratives within the genre, her fiery lyrics peppered with themes of spiritual evolution, social injustice, and messages of empowerment.

An ardent student of the culture, she has crafted, alongside legendary Atlantan producer Sol Messiah, a fresh sound dubbed God Hop. Melding the raw energy and classical precision of the golden era of hip-hop with a lyrical ingenuity and consciousness that sets her light years ahead of her musical peers, Sa-Roc has quickly grabbed the attention of many of hiphop's established luminaries.

Sage Francis, a rapper from Providence, Rhode Island, is the founder and CEO of the independent hip-hop record label Strange Famous Records. This label first began as a way for Francis to bootleg his unreleased songs in the late 90's and has since evolved into an official enterprise with an expanding roster of like-minded artists. Francis won the Scribble Jam Emcee battle in 2000 and released several CDs available only on his tours (Sick Of Waiting, Sickly Business, Still Sickly Business included). In 2001 his song Makeshift Patriot became an internet hit for its insightful critiquing of American Media during, and immediately following, the 9/11 attacks. Before releasing Personal Journals on Anticon.. He joined up with Joe Beats in the duo Non-Prophets, releasing the albums Hope and Hopestrumentals in 2003 and 2004 respectively. He subsequently signed to Epitaph Records, the first hip-hop artist signed to the label, releasing the albums A Healthy Distrust (2005) and Human the Death Dance (2007).

Francis is also part of the contemporary spoken word movement, performing often at poetry events. Francis' relationship with the Providence Poetry Slam community (he was on their 1998, 1999 and 2002 national poetry slam teams) led to it being called "The House that Sage Francis Built." From 2000 - 2002, he also DJ-ed for the NYC-Urbana Poetry Slam, a weekly slam series held at the legendary punk rock venue CBGB. In May 2008, Francis represented "stage poetry" in a "Page Meets Stage" event at the Bowery Poetry Club, with Jeffrey McDaniel representing the "page poet."