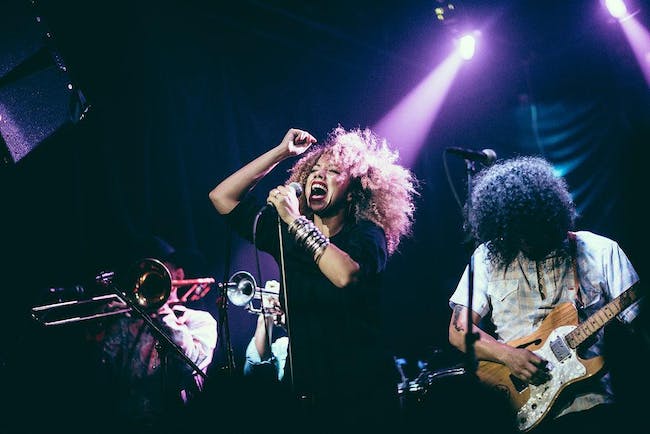 For nearly twenty years ORGŌNE (a universal life force, pronounced or-gōne) has churned out gritty funk and soul recordings and toured relentlessly across the United States and Europe. Traditionally both the studio and live iterations of the band drew on a tight-knit collective of the West Coast’s finest funk and soul musicians—although founding members Sergio Rios (guitar/engineer) and Dan Hastie (keyboards) have been constant anchors. However, since late 2013, Rios and Hasite have been joined by Dale Jennings (bass), Sam Halterman (drums), and singer/lyricist Adryon de León to form a permanent nucleus.

Establishing a solid core of musicians was instrumental in creating such a cohesive, tight LP. “It allowed us to develop trust and be vulnerable with each other,” says de León. From the a cappella opening of “All Good Things” to the dance floor filler “Easy Love,” Reasons packs a punch. It’s as if the listener is transported back to those sessions in Joshua Tree, staying up late and jamming with the band. As a producer, Rios shines: “I’ve learned to stop being so precious about every little detail. It’s just art. Sketch your picture and move on.”