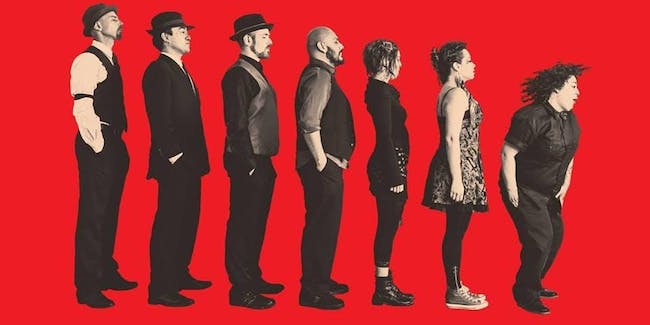 La Misa Negra (Black Mass or Black Ritual) is an 8-piece band from Oakland, California that plays a unique blend of 1950's and 60's style cumbia and high-energy, Afro-Colombian dance music. The symbolism behind their name pays tribute to the genre's African roots and Caribbean heritage, and celebrates the spirit and ritual of dance. Powered by horn and accordion-driven riffs, a fierce rhythm section, and a vintage Colombian sound, La Misa Negra delivers an electrifying performance that explodes with infectious dance grooves and punk rock energy. Since their live debut in the fall of 2011, they have been dropping heavyweight cumbia, porro, and gaita - proving through dance and sweat that La Misa Negra is more than just a band. It's a PARTY!

Consisting of ten tracks, Misa de Medianoche (Midnight Mass) is a journey across various styles of cumbia, porro, and gaita, beginning with a fast-paced, monster title track meant for a midnight voodoo dance. The cumbia kicks into mid-tempo groove with songs like the sensually hypnotic, "Por la Bahia," the rootsy, accordion-laced "Cumbia Milagrosa," and the album closer, "La Cumbia Cura," which encourages listeners to leave their pills on the table and let the cumbia do the healing. By capturing the raw energy of their live shows and the classic Colombian sound they have become known for, Misa de Medianoche serves as the perfect introduction to anyone who has yet to witness what these Oakland cumbia peddlers can do with a cowbell and a crowd. Branded as "hella bailable" and guilty of fueling spontaneous dance parties, Misa de Medianoche invites the soon-to-be converted to dance at the altar of La Misa Negra.