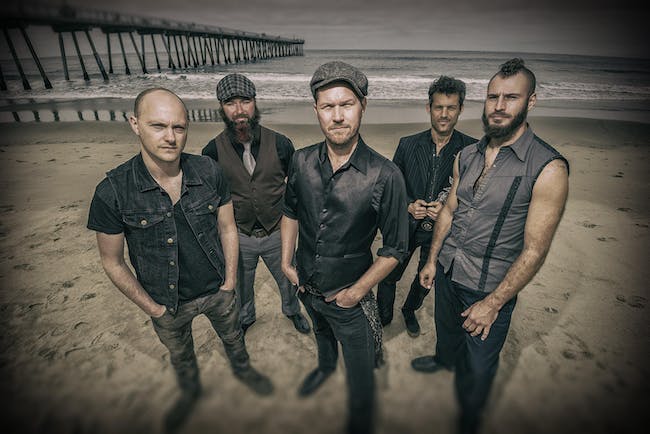 DIEGO'S UMBRELLA ABOUT DIEGO'S UMBRELLA - There are two kinds of people in this world: those who love Diego's Umbrella and those who don’t know them yet. Celebrated as San Francisco's ambassadors of Gypsy Rock, these world-renowned entertainers have created an irresistible mélange that is entirely their own. A Diego's Umbrella show is a singular, ecstatic experience. One concert is all it takes to becoming a believer. Night after night they effortlessly blend eastern European sounds, marching drums, beautiful harmonies and catchy hooks with a showmanship that has all the fire and unpredictability of youth, marked by a chiseled refinement of years of experience on the road. The group's uncanny gift for pleasing crowds, from standard clubs to huge festivals such as High Sierra and Outside Lands, has earned them a zealous and ever-expanding following across the United States and Europe. Continuously touring abroad has always fed their aesthetic, and has resulted in incorporating the scales of klezmer, the strings of flamenco, and the energy of punk rock.

VANDOLIERS are the next wave of Texas music. The six-piece Dallas-Fort Worth group channels all that makes this vast state unique: tradition, modernity, audacity, grit, and—of course—size. Forever puts it all together for an enthralling ride down a fresh Lone Star highway. Produced and recorded by Adam Hill (Low Cut Connie, The Bo-Keys, Deer Tick, Don Bryant, Zeshan B) at American Recording Studios in Memphis, TN, the band’s third album (and first with Bloodshot) Forever is a mix of youthful and defiant punk, rugged Red Dirt country, and vibrant Tejano. The full-length’s 10 songs blend emblematic rock ‘n’ roll with bold horns, violin, and a slather of twang reflecting where the band is from, where they’ve been and, eventually, where they’ll be headed. It’s regional and universal all the same.