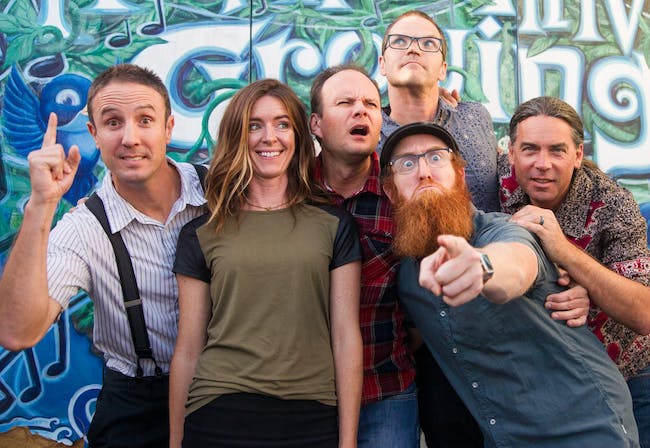 Coffee Zombie Collective formed in 2010 as a loose group of sleep-deprived musicians playing their favorite lesser-heard songs alongside karaoke barn burner hits. The band has continued to evolve, mixing in their own originals alongside twisted acoustic reimaginings of contemporary pop hits such as Lourde's "Royals" and cult classics such as Motorheads "Ace of Spades." Coffee Zombie Collective takes the songs you love, or love to hate, and weaves them into medlies, or upside-down interpretations that always leaves audiences smiling. The band's high-energy stage performances whip audiences into a sing-along dance frenzy. The repeated on-stage mantra is "If you know the words, sing along. If you don't know the words, sing louder!" If you're at the show, you're part of the collective, and highly encouraged to contribute in the frisky, sweaty, ad-libbed sound explosion that is Coffee Zombie Collective. It's never the same show twice.

The band can be succinctly summed by a recent description of a Popeye's chicken sandwich "The salt, the fat, the sharpness, the softnessâ€”together, the elements of [Coffee Zombie Collective] are so perfectly balanced that they meld into one another to form a new, entirely coherent whole."

ABOUT FULMINANTE Formed in 2015, Santa Cruz, California's Fulminante has been making noise in the Bay Area and beyond. The powerful trio is comprised of guitarist/vocalist Brenda Martinez, upright bassist/vocalist Paul Raney and drummer/vocalist Josue Monroy. The party started when Brenda, a Los Angeles native, sought to play music along the veins of Manu Chao and Gogol Bordello and was looking for like minded musicians. Paul and Josue, who had played together in another project previously, answered the call and the rest is history. The band's sound incorporates punk, rockabilly, ska, twangy blues rock, as well as latin influences to form a bombastic mix that will keep you moving. Dancable, drinkable music! Your new favorite band!