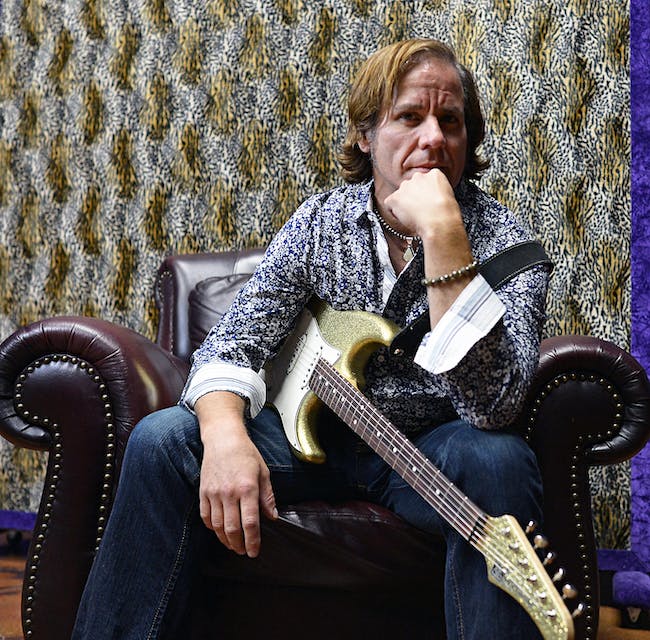 To classify Chris Duarte simply as a Blues Man is an understatement. In his own words, “rockin’ blues” or ”punk blues” describes him best. “Ferocious blues” also fits. Legend has it that Chris will play so hard that his fingers bleed in a set. The legend is true. Photos attest.

Chris Duarte is a road warrior playing more than 150 dates a year. As well, Chris has headlined major festivals and clubs throughout the US, Canada and Europe.

Chris is a savant, a sorcerer of tone, a master at channeling the spirits and sounds of great musicians of our past, while remaining completely recognizable in his own sound. He has shared his stage with many of the greatest musicians of our time as well as the multitude of “young lions” and local musicians he meets on the road. From his many years as a side man in Austin, he easily changes roles from front to side, graciously allowing all to share the conversation of the jam.

Chris Duarte’s music is ever changing. In many interviews, he has said “Music must evolve.” His own early offerings often become magical journeys into changing tempo and jazzy interludes before returning to their core. With such a vast catalog of recordings, there are no two shows alike. Every set list is different, and each song may be offered distinctly, based on the feel of a show and the audience. For those reasons, loyal fans often return to a Chris Duarte show again and again, and always walk away awed and satisfied to have witnessed such a legendary, but humble guitarist.